The large window of Yury Gusev’s workshop looks over the Smolenka River. There are many sea gulls that fly and scream wildly outside. There is an easel in the middle of the workshop. The picture on the easel contains a circus horse that is galloping madly around an arena while carrying a frightened clown. Vivid childhood memories often are the inspiration of his works.

Yury Gusev was born in Leningrad in 1939. His childhood home is located along the Moika River. The artist likes to depict the arches and front entrances of this house, childhood games that took place along the embankment, and the circus actors that performed on the Palace Square.

Gusev describes himself as a geologist, artist and an art critic. His first education took place in the Mining Institute. He then attended the Serov Art School and the department of art studies at the Academy of Arts.

Gusev’s most influential teacher was Georgy Dlugach. The period of Gusev’s studies under the supervision of Dlugach lasted for ten years. Gusev first encountered his teacher while attending art school. In the Hermitage Museum, he watched students copy masterpieces of famous masters under the tutelage of an elderly man who wandered by occasionally giving advice. That elderly man was Dlugach, the artist who worked on making analytical copies of canvases by Veronese, Titian and Rubens since the mid-fifties. This process was aimed at researching composition and the schemes of painting structure. Later on, Dlugach’s students along with Gusev organized the art group Hermitage.

The artist developed his own method to make a coloured drawing into a painting. In 1992 he joined the Union of Artists. Gusev has also been teaching at the Theatre Academy for many years.

Gusev believes that the themes of his paintings are pronouncedly subjective because they are constructed from the play of imagination, dreams and memories. This has caused the artist to be surprised by there being interest in his art from an audience. 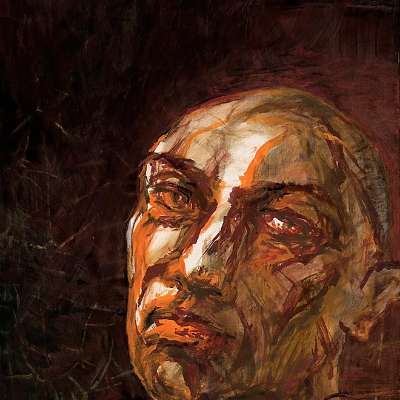 Graduated from the Leningrad Mining Institute, the Leningrad Art College named after Serov, and I.E. Repin State Academic Institute for Painting, Sculpture and Architecture. Studied principles of composition in Old Master paintings in the studio of G. Dlugach at the State Hermitage.

Membership in art unions and associations

Work are presented in the collections of

Painting Symbolism Naive art Realism Contemporary realism Abstract art
﻿
Save the items you have added to the chart! Do you want them sent to your email?