Galina Pisareva introduces herself as Gelya and signs her works using that name. This name, used on the paintings and sculptures she creates, demonstrates the warmth of motherly charm which is always present in her artwork.

The artist was born in the summer of 1933. The Pisarevs survived the Leningrad blockade and were evacuated to Ukraine in its closing days. In Ukraine, Gelya lived at her grandmother’s and was very popular among the local inhabitants for her drawing talent: she often drew roses in girls’ notebooks along with poems and songs.

On her return to Leningrad, Gelya’s school teacher spotted her talent and advised her to go to art school, which she did. She studied sculpture and graduated from the Tavrichesky Art School.

In 1961 Gelya enrolled in the sculpture department of the Repin Institute. After defending her diploma, Gelya started studying ceramic work at the institute where she worked for a few years practicing enameled ceramics.

The strict academic education did not manage to impose a practical manner to Gelya; she has always been into ‘people’s art’. She took her inspiration from the collection of folk art presented in the Russian Museum, icon painting and travelling to the Russian North.

The artist developed her free and independent manner during the years of her education, and continued after as she worked under official monumental orders following her own, non-ideological attitudes. In 1967 she joined the Union of Artists.

The artist’s favourite subjects haven’t changed: they are motherhood and the lyricism of rural life. Her canvases often show “a passing nature”: something often absolutely unfamiliar to an urban dweller but is close to everyone as a kind of historical memory. These are desolate villages with dark windows and women washing linen in a river or carrying hay.

Paintings by Gelya Pisareva harmoniously combine seemingly incompatible elements: the realistic school of the Academy of Arts, a love of the language of folk art and a special impressionistic painting style. Pisareva’s insight into ethnic background hasn’t led her to naïve art; rather it helped to develop her own recognizable artistic language.

Once, the artist exchanged her big workshop in the city for part of a wooden house in the Village of Artists. This old house is guarded by a wooden mermaid sitting on a pediment. The Village of Artists, surrounded by numerous small lakes, is isolated from the hectic city. When walking around the village, Gelya Pisareva finds motifs and scenes for her works. 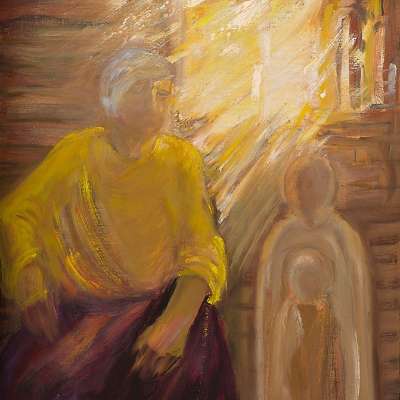 Painting Symbolism Naive art Realism
﻿
Save the items you have added to the chart! Do you want them sent to your email?