Large block-letters in the corner of the painting read ‘PASHA’. This is the artist’s short name.  He calls himself ‘the King of Still Life’ and claims that this genre is foremost for him. Still life had long been considered a decorative genre of secondary importance. Nevertheless, through still life, Babenko expresses such a great diversity of feelings and ideas that can hardly be imagined in the frameworks of this genre.

Pavel Babenko was born in 1946 in a Cossack village located in the Krasnodar region of Russia. As a graduate in art and graphics from the State University of Kuban’, he resisted the temptation to go abroad and paint foreign amenities of Venice and Provence in favour of remaining in his motherland, Kuban’. Babenko’s familiarity with his native land provided him with a richness of content for his works. Commonplace images such as a tuft of spring onions, a piece of lard and a row of bottles can declare more sense than the ruins of ancient but alien Pompeii.

Babenko uses large canvases for his works, and simple boxes are used as a substitute for tables, which is a common surface for still life arrangements. Babenko’s traditional arrangement of bottles, tufts of spring onions, smoked chicken and lard don’t look vulgar. Just the opposite, he extends the subject on a number of his works that are enriched with various meaningful constituents — from allusions to the Last Supper and the Crucifixion to the interiors of a butchers’ or at an industrial plant canteen.

The painting of Pavel Babenko is expressive and emotional. The artist is utterly sincere with the viewer. It is as though the viewer sits in front of the table depicted in the painting and is having a frank conversation with Babenko. He makes this traditional small-scale and intimate genre of still life into a means of expressing his thoughts, that which he has been longing to say and which must be said. 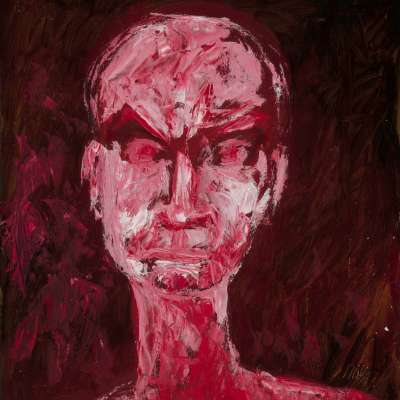 Painting Expressionism Surrealism Realism Decorativism
﻿
Save the items you have added to the chart! Do you want them sent to your email?