Sazhin’s idiosyncratic works are easily distinguishable from any others within the Erarta collection. Following a formal classical education, Sazhin was able to refine his technique in such a way so as to adapt it to his revolutionary subject matter whilst still being true to his creative goals.

An astonishing thing about his works is that they are simultaneously abstract and figurative without giving the impression of being discordant. Such pieces as ‘Twosome’ seem to contain a series of images which allude to nature (i.e. frogs), but somehow manage to remain abstract.

Nikolay Sazhin was born in Troitsk, Chelyabinsk Oblast, in 1948. His extensive interest in the art and fine arts in particular brought him to the Serov Art School, one of the dominant artistic establishments at the time. Having graduated from the Serov School, Sazhin went on to be accepted by and flourish at the graphic arts department of the Repin Academy of Fine Arts. Having graduated in 1978, he taught and inspired young talents at the Serov Art School up until 1989.

Sazhin’s unique teaching methods and widespread popularity with his students saw him being welcomed as a guest lecturer at Washington State University and Reed College in Portland, Oregon. These high-profile teaching positions between 1989 and 1990 secured him the title of Honorary Professor at the National Academy of Art and Design in St. Petersburg from 1997 onwards. The artist passed away on 2 April 2019. 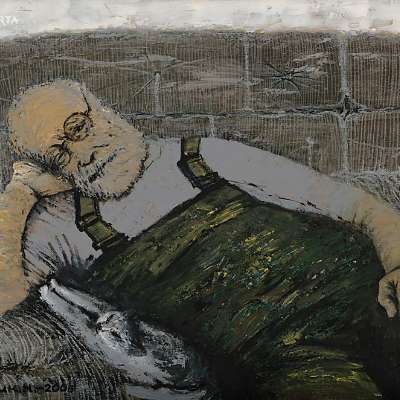 Painting Symbolism Expressionism Other Realism Abstract art Decorativism
﻿
Save the items you have added to the chart! Do you want them sent to your email?