Alexander Lotsman was born in Khakassia in 1947. When he was six, the family moved to Achinsk, a small town in central Siberia not far from Krasnoyarsk where he spent his childhood. He still remembers the people from that town: strange characters who looked as if they had stepped out of Filonov’s paintings - outwardly sullen but open and sincere inwardly, quite different from inhabitants of big cities.

It was in Achinsk where Lotsman started to take an interest in art. The young man attended classes at a local art studio and later on went to the Krasnoyarsk art school. After graduating, Lotsman served in the army for three years. Upon returning in 1971, he moved to Leningrad with a friend. They had come to an alien, strange place which they only knew from the Hermitage albums and postcards containing views of the city. They had neither friends nor relatives in the city. Lotsman studied part-time at the Repin Institute, attended lectures on history at Leningrad University and spent long hours at the Hermitage and the Russian Museum. At that time his imagination was captured by the artwork of Petrov-Vodkin, Nesterov, and artists of the first half of the twentieth century: Lentulov, Tatlin, Kuprin and Filonov. The artist confesses that he would go to the Russian Museum only to have a look at Taking the Veil by Nesterov: after making the long way through museum halls he would stop by this favourite painting and could stand there looking at it for ages.

As the years went by the artist gained a new circle of friends and acquaintances. Alexander Lotsman joined the cultural life of the city quite naturally and felt involved in what was happening around him. He no longer experienced the naïve delight from the embankments and prospects which had he depicted on his first landscapes. The artist was ready to rethink his aesthetics and attitude to the subject. These changes brought about a serious phase of his artistic career. When the unofficial Association of Experimental Art began to exhibit in the 1980’s, the artist took part in those exhibitions that occurred in Russia and abroad after the collapse of the Soviet Union. These exhibitions introduced him to the art of Western collectors.

In the 90’s he made connections with the Pushkinskaya-10, the first art center that arose in the city quite spontaneously and then some time later was recognized by the authorities. The Pushkinskaya was, and still is, home to many artists. A solid artistic fellowship under this one roof helped him to solve the problem of having a studio.

However, Lotsman found that city life couldn’t hold his attention indefinitely. In search of adventure, he travels around the country every year. He moves away from the noisy crowded streets where he can take his time and peacefully work with landscapes which remain his favourite genre. ‘The most important things in a picture for me are colours, composition, harmony of tones and spots that produce this artistic musical chord, intuitive sounds and spirits coming from canvas’, the artist has said about his works. 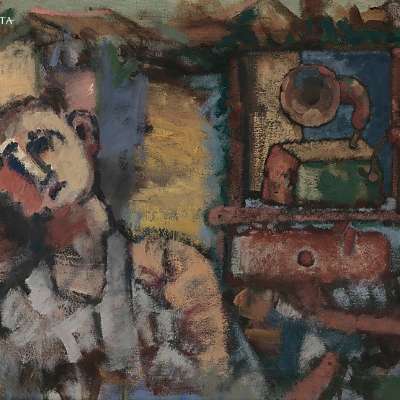 Painting Naive art Graphics Realism Decorativism
﻿
Save the items you have added to the chart! Do you want them sent to your email?